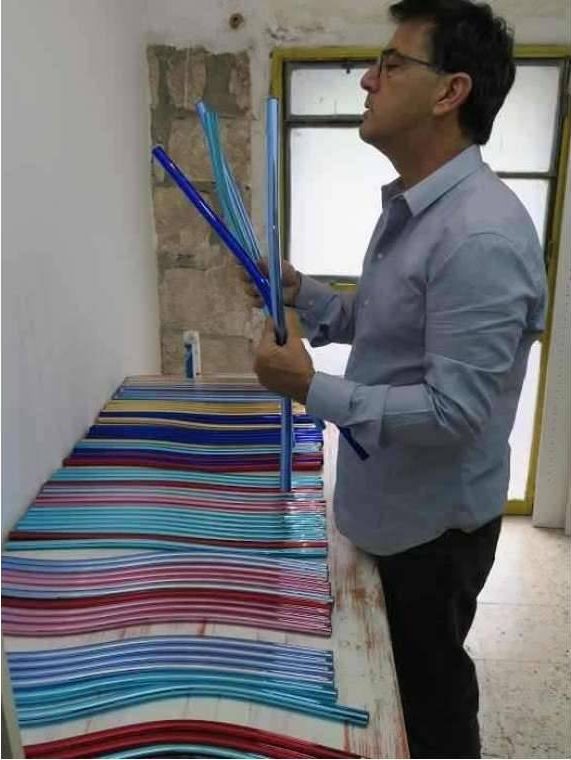 For over 2000 years the Jewish people has been creating objects and utensils for use in their beautiful religious ceremonies.  This is a tradition begun while they were still wandering in the desert carrying the Tabernacle with them.  Decorations and adornments were a basic way for a simple Jew to show his awe and love for his God.  The beautiful vessels and tools created for the Temple were a way for the People of Israel to show their love for the God of Israel.

Silver and gold have always been used for ornamentation and decoration.  Traditionally, the ornamentation of tools was for artistic reasons, and as a way of expressing their awe of God.  Later the tradition spread also to the decoration of ceremonial objects.  That was the foundation of the tradition of Judaica - Jewish art. The Jewish people have 613 mitzvoth given in the Torah itself, and many more which have been ordained by the rabbinic leaders.

Some of those mitzvoth are ceremonial, such as the building of a Succah, the huppah, ritual hand washing, the writing of a Torah scroll and so forth.  The artistic need burning in Jews' hearts brought art to ceremonial tools as well.  Decorated Torah arks and washing cups, ornamental Mezuzah boxes, Shabbat candlesticks and Hannukkah Menorahs etc. are all the realization of the mitzvoth as we received them at Sinai. Jewish art has become an integral part of Jewish ritual both in Israel and in the Diaspora.  The guiding principle is that the more elaborate an item is, the greater the owner's love and awe of God are.  Elegance and ornamentation are a symbol of the measure of the Jew's love for his God.

Of course, besides symbolizing the Jew's awe, they also give an idea of his financial status.  Simple Jews, who could not afford to decorate their ceremonial utensils, made do with the understanding that He who reads men's hearts surely knows that sometimes good intentions are worth more that gold or silver. The art of Judaica has developing and advancing from generation to generation, for over 2000 years, be it by technological advances, or due to the varied materials available in the different diasporas - gold, silver, copper and so on.

Avi Luvaton, a chain of Judaica stores, have brought conceptual modernism to the traditional artform.  The design, the raw materials, the unique concept have all converged to create magnificent pieces though which anyone purchasing Avi Luvaton's art can express his or her direct and powerful connection with the God of Israel. While Avi Luvaton's Judaica is relatively expensive compared to other artists in Israel and abroad, his art is his compass and therefore, even though the object is ceremonial, it is also a groundbreaking objet d'art, adding beauty and color to the home.